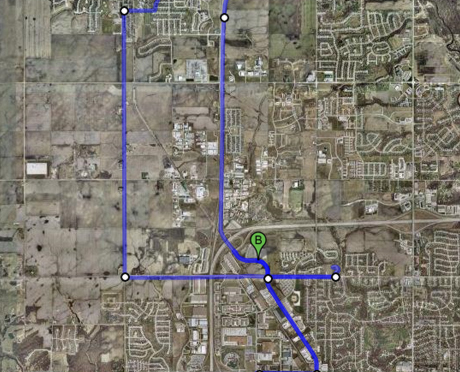 A recent acquaintance of mine, Tim Cigelske dropped himself off in Colorado with a bike, a bottle of water, and a few power bars (as well as a kick ass Chipotle jersey) and in currently working his way back up to his home city of Milwaukee.

Having only biked 80 miles to Madison and, more recently 115 miles around Riverwest, this seems like quite the feat.

Now I’m on vacation in Iowa and since I have no significant other traveling with me (unless you count my beagle, Frutiger) I had room in the trunk in which to throw my bike. Half the family I’ve come to visit is gone and most of this morning I was alone. And since I forgot to pack some food for my lovable companion, I thought it would be good to start practicing my distance biking by making a trip out to Target.

From where my parents live, it’s only a mere 7 miles away, but since I’m in the suburbs of Iowa, the city planners only come up with plans for expansion and rarely come to any sense of completion. Roads suddenly end (they’ll put them there soon) or they’ll suddenly turn you down the opposite direction and bike paths suddenly end (you just wait, this place is gonna be great!).

Or maybe those are just my excuses as to why I got lost and overshot my goal by about 13 miles. I went back and forth down a few main roads and just as I was about to give up and find my way home, I was at Target’s front door. When I realized that I was practically feet from it almost a half–an–hour before I felt a little sheepish, but ultimately it was just exciting to take the bike around.

And it rides so much better now that I’ve raised the seat an inch.

I’ve only recently discovered the miles/calories/gas-savings site, Gas Free Commute in which you can input your miles and compete to see how green you are. Most of my trips have lately been to work, which is kinda boring. But today I win.