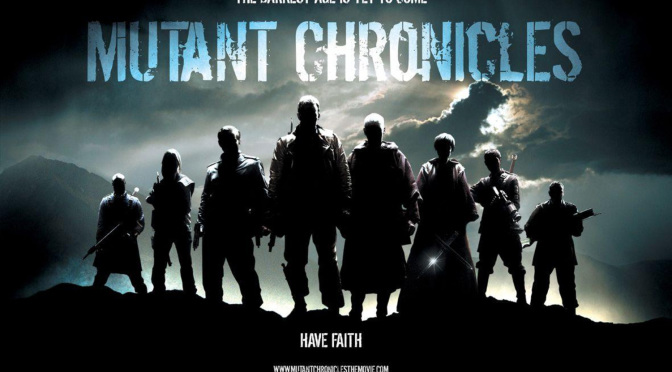 I watched Mutant Chronicles, a movie based on the Swedish roleplaying game published in 1993. I didn’t come into contact with the game until about ‘95 or ‘96 when they released the collectible trading card game, Doomtrooper (which is a less cringe inducing name, if you ask me). That was back when Magic: The Gathering TOOK OFF and every fantasy outlet had to have their own version. My brothers and I had no idea what we were getting into so we all bought our own game (I got Rage, based off the RPG, Werewolf: The Apocalypse, Adam got Wyvern, a dragon–fighting game which, to my knowledge, wasn’t spawned from anything except good ol’ mythology, and Justin picked up Doomtrooper).

As time passed the win was yielded to Doomtrooper and we three began assimilating into the game, but soon the game became so mechanically unbalanced from subsequent expansions that it wasn’t that fun to play.

The Mutant Chronicles universe is, stylistically speaking, a cross between Steampunk and Cyberpunk. It offers some of the Victorian flair that Steampunk revels in, but is technologically more advanced. That is, instead of stunting at steam power, the Mutant Chronicles universe is stunted after World War I, a time before atomic technology took off (or was never created…I don’t entirely know).

So trench warfare is still a common way of fighting, Zeppelins are a common way of traveling but the space travel is still possible. Five Mega Corporations control the earth and fight amongst themselves, while a Dark Legion of Necro Mutants from outter space threatens to take over. This forces the Mega Corporations to flee to inhabit Mercury, Venus, Mars, and the Asteroid Belt. In the meantime a sacred Brotherhood is working to quash the Dark Legion.

Now as for the movie, it was produced and released over in Europe just over a year ago and was only recently released direct to DVD in the United States. The quality of the movie is a step or two above the Syfy television fare and includes actors Thomas Jane, Ron Perlman, Devon Aoki, Anna Walton and even John Malkovitch(!?)). And while following the recipe for a successful action movie (i.e. the black guy gets it first and the American comes out on top) Mutant Chronicles would definitely not compete against the Hollywood machine. I’d start with tighter editing and move from there.

That being said the movie does stay pretty true to the universe’s roots. They give us canonical characters, like Mitch Hunter, Max Steiner, Valerie Duval and Sgt. MacBride (though his race changes). The guns are beefy, almost unweildly semi–automatics. The underworld landscape is suitably carved, craggy, broken and malformed. There is gun play and sword fighting. And the story, overall, brings me back to the days when we would craft some creative roleplaying sessions.

It’d have been nice to see the universe more fully fleshed out, á la Lord of the Rings, but I’m a sensible person and I recognize that a marginally popular fantasy universe in Sweden probably won’t make the box office bank to recall that kind of cash. I’m surprised there was enough interest to make the movie at all! Maybe I can hope for a Clone Wars–style cartoon, though?

Now, would I recommend renting it? Hmm…maybe? There aren’t enough movies that focus on trench warfare and there is a suitably thrilling abandoned elevator shaft scene. There is also a lot of face stabbing (a preference of the Necro Mutants, it seems), quite a bit of cartoon blood and violence and the casual, unromantic final minute makes you smirk. It’s certainly no life changer, but if you’ve got a rainy Saturday afternoon, go for it. Otherwise this movie is best enjoyed through a good pair of geeky fan glasses.

←The plea for Janet Zweig
This Year in Music 2009 →
Single