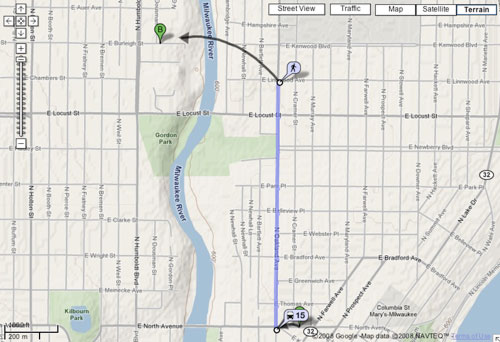 Google just recently released a useful new app called Google Transit, which takes bus information and applies it to it’s map app. This sounds infinitely more useful than anything the DOT or the Wisconsin government can throw together and is much more user friendly for those who don’t know how to use a computer. Arguably a large demographic of users riding the bus would probably fall into that category.

All you have to do is tell it where you are and where you’re going and it’ll give you a recommended route. At least two of my friends have tried it with success. I, however, did not.

I never take the bus to work because it’s a short distance and, even so, would require me to make a switch between two buses. Two dollars and an hour later I’d finally reach my destination, barely two miles away. So I usually bike or walk, and occasionally just drive. Google Transit seemed like an easy way to figure out if I was missing a better, more direct route.

It turned out I wasn’t thinking outside the box, something Google is quite good at. They told me to walk down the block and catch the 15 bus for a few minutes. Then get off, fordthe Milwaukee River and walk home. Their map even makes it look deceptively easy, probably because they don’t show the struggle against the rapids, construction of a raft or the Native American Guide and pack of Oxen (see The Oregon Trail). It actually looks more like they’re recommending I hop over the river. Sorry, Google. You might be big enough, with the world in your hands, to make such a maneuver, but I think I’ll just stick with my bike.