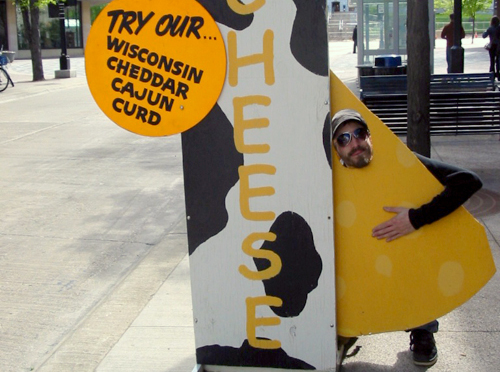 A friend and I may have gone out of our minds, because we decided to bike from Milwaukee to Madison, a trek more than 80 miles long. Before this trip I hadn’t biked more than twenty miles in an entire day. But when we headed out we thought positively about it. We thought we could maintain a speed of about fifteen miles per hour and that it’d take somewhere around six or seven hours. It would be a relatively easy ride, as we planned to follow the Glacial Drumline Trail, a trail that was mostly “downhill.”

However, as anyone else should have expected, it was significantly worse.

The first eighteen miles were okay. We took one of Milwaukee’s main streets, Capital over to a friend/co-worker in Waukesha, who would directed us to the trail. During this first leg we admired the cute houses and guessed whether that insurance place used to be a Burger King. We counted the J&J Catfish Restaurants (We ended at five).

After a brief stop for toast in Waukesha, which was about the sixteenth mile, we hit the trails, and that’s when the true endurance test started. Most of the trip we had the wind in our face. The one time it wasn’t was when we got turned around for a few hundred feet. At the twentieth mile my stomach was cramping horribly. My back hurt and I felt faint, but after a few energy bars and a lot more water I was back in shape. At the fortieth mile my knees were hurting, my butt was hurting and the clouds threatened to break apart above us. The wind kept blowing, and we were running out of water more frequently.

At one point the trail broke apart and we had to take to the highways again in order to get back on. We stopped at a random home to see if they could help us refill our bottles. The house we chose happened to have a frightened elderly lady, who wouldn’t open her doors more than a crack and demanded to see our bottles before she would allow us to fill up with her garden hose.

Parts of the trails were muddied with puddles, which were breeding grounds for thick swarms of gnats. We had to cover our mouths with handkerchiefs to stop from inhaling them. By the sixtieth mile, every mile marker felt twice as spaced. With twenty more miles to go, our middles were falling asleep and our palms were getting bruised. We expected, since the trail ends at a lower elevation than it started, that we would have some coasting time, but in truth it felt mostly perfectly flat. This made me slightly jealous of my friend’s variable speeds. That, in conjunction with the facing wind, meant we were constantly peddling.

We were stopping and walking more frequently, we switched our shoulder bags from one side to the other, and our sense of humor was diminishing. Diminishing, but not disappearing. When one person felt down, the other was there to offer encouragement or distraction. With ten miles left we hit Cottage Grove where the trail ended. We asked for directions to the next street but the first three people we talked to weren’t from around there. When we started on the last leg, the clouds started sprinkling, but thankfully they moved out quickly.

Through it all, there were several points where giving up seemed like a good idea. We contemplated who would pick us up, where we would wait, and whether we could afford a taxi. And whenever we agreed this was a good idea, we just got back on the bikes and powered on.

But finally, mercifully, eleven and a half hours later, we coasted down what seemed like the biggest hill in Wisconsin, down into the city of Madison. We found an Italian Restaurant and loaded up on pasta. We got in contact with a Web414 friend named 4braham, and died for 10 hours at his co-op. We woke up with sore throats, sore knees…sore everything. More water. More stretching. No more biking.

It was clear we weren’t going to make it back. We’d have the wind in our favor, but not even the softest pillows could save our butts from the punishment of those seats. We called up my roommate who, more joyfully than I would have expected, agreed to meet us in the middle of the city and haul us back to Milwaukee.

When we finally arrived at home, one of my neighbors asked if I was a biker. Wearily I answered and he told me that he’s planning a twenty four–hour bike ride around Riverwest. So maybe I should’ve considered this just a day of practice.

It may sound like the trip wasn’t worth it, but it actually was. It was a huge challenge, and for all the problems we encountered, we still took immense satisfaction for being able to get out of our element and put ourselves to the test. When I was lying in bed on Sunday afternoon, falling in and out of sleep, all my muscles ached with more achievement than pain. It felt good.