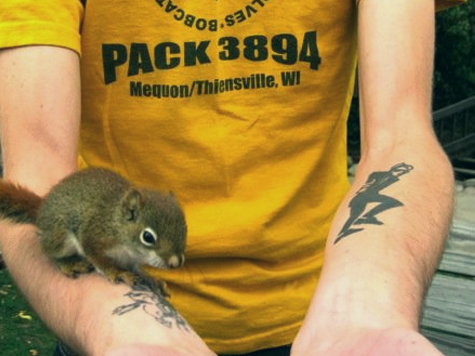 This weekend I went out with Tim from Teecycle.org to do some tee-shirt modeling. Our location, this time, was Klode Park, located at the top of Whitefish Bay. It’s a small park with “No Dogs Allowed” signs posted everywhere but with plenty of dogs still roaming around. At one point a police officer staked himself on the road, but given the relative fanciness of the area and lack of ticketing the dog owners (thankfully) I had no idea what he was there for and he soon left.

Once I we started the photographic process I noticed a small problem starting to develop. At the Bike Co-Op we call it “The Syndrome.” That is I inevitably want to purchase everything I put on. The camera Tim uses is quite simple, but it does a bang up job of capturing the right saturation of colors and a nice, subtle grain. I’d also like to say it does a great job making me look good, but I’d like to take at least some of the credit for that.

While we were there we were met by a very forthright miniature ground squirrel who popped onto the park’s path, throwing himself in the way of our oncoming feet, bicycles, and other tee shirt modeling gear, and demanded food. He made a good case for himself; he was just too irresistible to turn down. I had the scraps of a peanut butter sandwich from earlier and tossed a crumb his way. When he finished he demanded more. I put the crumb in my hand and he hopped on and I picked him up. “This is probably not the greatest idea habituating these little guys to humans. It’s screwing around with nature,” I said, but it provided for the perfect Teecycle shot. Me in a Boy Scout t-shirt, communing with furry woodfolk.

While we continued to shoot in various locations around the park the little guy kept following us, and we kept his belly stocked for the winter. We even saw a brother of his in the parking lot, following so closely behind a family he almost get stepped on. “Watch out,” we warned. The family turned around and, spooked by their pursuer, screamed and jumped into their SUV.

We all laughed at how freaked they were by such a small (though admittedly demanding) creature until, without realizing it, they put the car in reverse, backed out of their spot, and crushed the back legs of the tiny squirrel.

It all too uncomfortably illustrated the point I brought up earlier. That puffy–tailed squirrel learned that the parking lot was the easiest way to get food and as a result, tangled with something much larger than he ever anticipated. As the poor guy was struggling to figure out what had just happened and how he could get out of the situation, we knew the only answer was to finish the job.

Feeding that little squirrel gave us the syndrome. We knew we couldn’t take responsibility for this animal, and we knew it wasn’t wise, but we did it anyway. And the reality of the gravity of the situation was much harsher than a closet full of t-shirts.