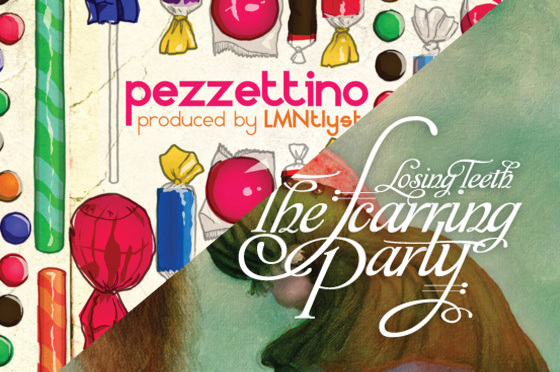 The Scarring Party has been one of my favorite bands from its inception. Lead singer Daniel Bullock has managed to combine folk, old-timey, and punk ethos into a sound that isn’t duplicated anywhere else. And really, I’m not just saying that. Please let me know if you’ve heard anything remotely similar anywhere else.

There are bands that lean more Waitts-ian, or bands that tilt more accessibly (i.e. weird instruments with a more recognizably modern sound), but The Scarring Party sound like an off-kilter version of something you’d have heard crooning out of a giant radio box in the 30’s, in between episodes of The Shadow and Little Orphan Annie.

Swirling this audio aesthetic together with an accordion, tuba, and other homemade instruments might sound like a gimmick if it weren’t for Bullock’s understanding of music and ability to write a solid pop song that could stand under any genre.

The Scarring Party’s newest album, Losing Teeth, will be released on August 13, 2010. Ray Cesar gave his blessing to use one of his paintings for the cover, while I was responsible for incorporating the logos and track listings, as well as designing the disc face and accompanying lyrics book (images coming soon).

I also worked with Daniel to conceive of this t-shirt design. The Scarring Party has released a few t-shirt designs, but have found that most people will only buy black; any design that works optimally on a colored shirt, no matter how clever it is, will reap approximately an eighth of the sales.

On the other side of the pop coin is a one woman band that goes by the name Pezzettino. She, too, employs an accordion, but to a much different effect, with an indie pop sound. Her latest album, Lub Dub, is a break up album that starts with the sugar high of a fresh relationship and follows through to the inevitable crash.

I had the honor of conceiving and illustrating a candy coated cover for this project. Working with Pezzettino has been a great experience; I have felt confident throwing her several designs, knowing that she would make the best choice regardless.

And for the record, I wasn’t going for the whole Pez Candy to Pezzettino thing. That wasn’t something I had considered until after work on the illustration had begun.

Her album is basically all set to release, digitally speaking, but she wants to see it on vinyl as well. I, too, would love to see my work on a 12” cover, so run over to her Kickstarter fund and toss some cash her way. (Besides feeding my ego, there are more good reasons to support artists through Kickstarter, too.)

Look for Pezzettino’s official release to happen sometime in September of 2010.