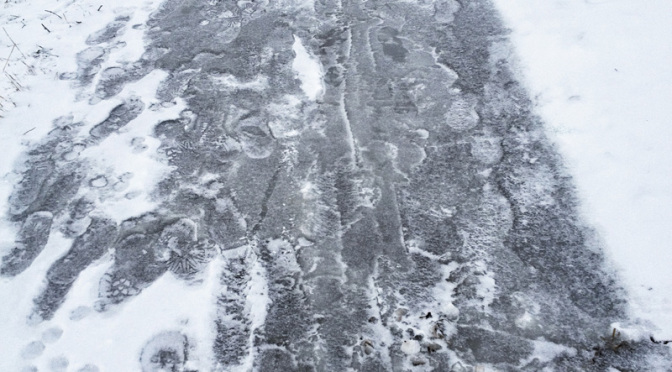 “Please find attached a current photograph of the switch back, just beyond the Marsupial Bridge at Kadish park.

I have often had to put forth a request to have the bike paths and recreational trails cleared after a heavy winter storm. When make the request I always ask why these trails are not cleared in an immediate way, considering how vigorously the streets are salted and plowed (though I could go on about the state of the bike lanes every year).

The response I usually get (if any) is that the city doesn’t plow the paths because they assume it is too cold for anybody to want to use them.

Well, here I offer you undeniable proof, in the form of rutted, iced over foot prints and tire tracks.

People are using these trails all the time. Under every condition. In order for these prints to have occurred many, many people would have had to commute through our most recent weather system, which involved an unusual combination of dropping temperatures, rain, sleet, freezing rain (yes, sleet and freezing rain are different), ice, and snow.

You can see, despite Mother Nature’s hostility, people were still out in the thick of it. We can assume that if this many people were out on this path in the middle of it all, that many, many more people would like to be able to continue to use these paths when it is bright and sunny (albeit arguably cold).

These trails become impassable. They are both deeply rutted and extremely slick. Even someone who is as well prepared for any condition, with fat tires, low gears, slow speeds, and metal studs, I still find myself taking several spills on the way down.

Please, make it an official part of your policy that the trails you oversee are made available 365 days a year. Don’t assume that we are weak and lazy. If anybody complains, show them this picture and tell them, this is what the people want. Don’t give us an excuse to stop exercising and stop participating. Don’t take away from the enjoyment of the most beautiful parts of Milwaukee.

←Out with the old, in with the new: Redesigning OnMilwaukee for 2012
A brief history of my Banksy “Flower Bomber” costume →
Single