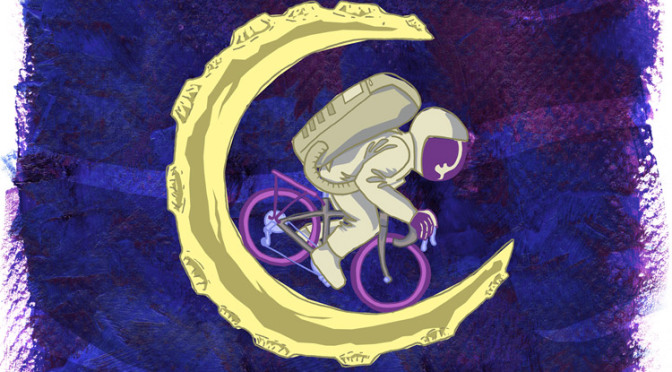 I’m not a person who makes resolutions (or rather, I don’t make resolutions on only one day out of the year), but my brother suggested I attempt to circumnavigate the moon by bike.

Even if I don’t make it all the way around the moon, hopping from crater to crater seems like a fun challenge for anyone. Plus, maybe there’s a chance to learn something, too.

Using Google Earth, I’ve mapped a route around the moon. It’s about 10 miles over the circumference (riding landmark to landmark instead of as the crow flies), so I may tweak it slightly to get it closer to the true circumference. Or you can cheat and subtract 10 miles at the end. Or you can be a bullhead and insist on this exact route. Whatever. It’s just supposed to be fun.

I imagine it would be fun talking with other co-workers about your progress.

“Last night I made it to Sampson.”

“Ah, really? I haven’t even gotten to Huxley yet. But I’m riding to Madison tomorrow, so I’ll catch up soon enough.”

Here’s the cue sheet if you want to participate. If there is enough interest, maybe I can scrounge up a prize for those who manage to complete the route:

Edit: January 13, 2014: Added kilometers for all of my metric readers who know they’re on the right side of history. I also formatted the cue sheet into a table, where data belongs.

Edit:January 14, 2014: If you’re on Daily Mile, you can easily track your mileage through the Lunar Cycle challenge. If you’re on Twitter, you can use the hashtag #LTFLunarCycle.