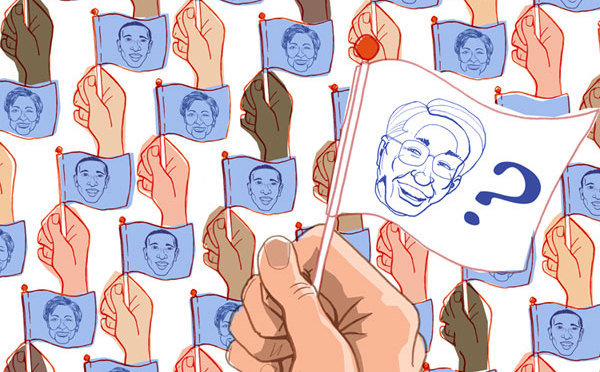 For the first time in my voting career, I feel like I have to make a real decision in regards to whom I am casting my vote towards in the upcoming Wisconsin primary. Since the beginning of this very, very (very!) early race, my brother had pointed out what seemed to me to be a logical, liberal-friendly platform of former Alaskan Senator, Mike Gravel. I took a couple of those “Vote by issue, not by personality” quizzes and came out overwhelmingly standing on the same side as he. Of course following closely behind are beloved news media mainstays, Barack Obama and Hilary Clinton, each of whom, according to these quizzes, traded evenly between second place. The Republicans laughingly trailed quite far behind.

Despite the even second place wins held by Obama and Clinton, I’m fairly certain that, without Gravel, I’d be casting my vote towards Obama. It’s his freshness that I agree with over the sort of “faux monarchy” we seem to have created with all these Bushes and Clintons.

But at the time second place didn’t matter to me, because I was set on voting for Gravel. I know he isn’t going to win, but I would still like to do my part in turning the wonky art of politics around by voting for the best option, instead of voting for the lesser evil.

Of course, by this time I assumed we’d see a clear leader and Wisconsin’s primary wouldn’t matter much. I figured my voting for Gravel would be an empty, idealist gesture (the easiest kind to make). This clear leader, however, has yet to show themselves. Obama is trailing the Queen by mere points, and I’m torn between my desire for immediate change, and my desire to follow through with my beliefs, resulting in long (long!) term change. I don’t want another Clinton in the White House, but can I really do anything about it?

Would my vote for Obama make a significant enough difference to turn the tides against Clinton? If I voted for the lesser evil, would that change the outcome? Sure, in an idealist world, if everyone voted for who they believed in, this outcome would be radically different, but I’m pretty sure this is still a cynical world, and this election is not going to be that change. This outcome has probably already been decided by everyone but me.

Then again, I didn’t think I’d see the first black man or white woman running for President, and actually showing potential to win. Not this early in my life, anyway.

So I’m still torn about which direction my ballot is headed. My cynical head, or my idealist heart. I’ve only got a couple more days to decide.