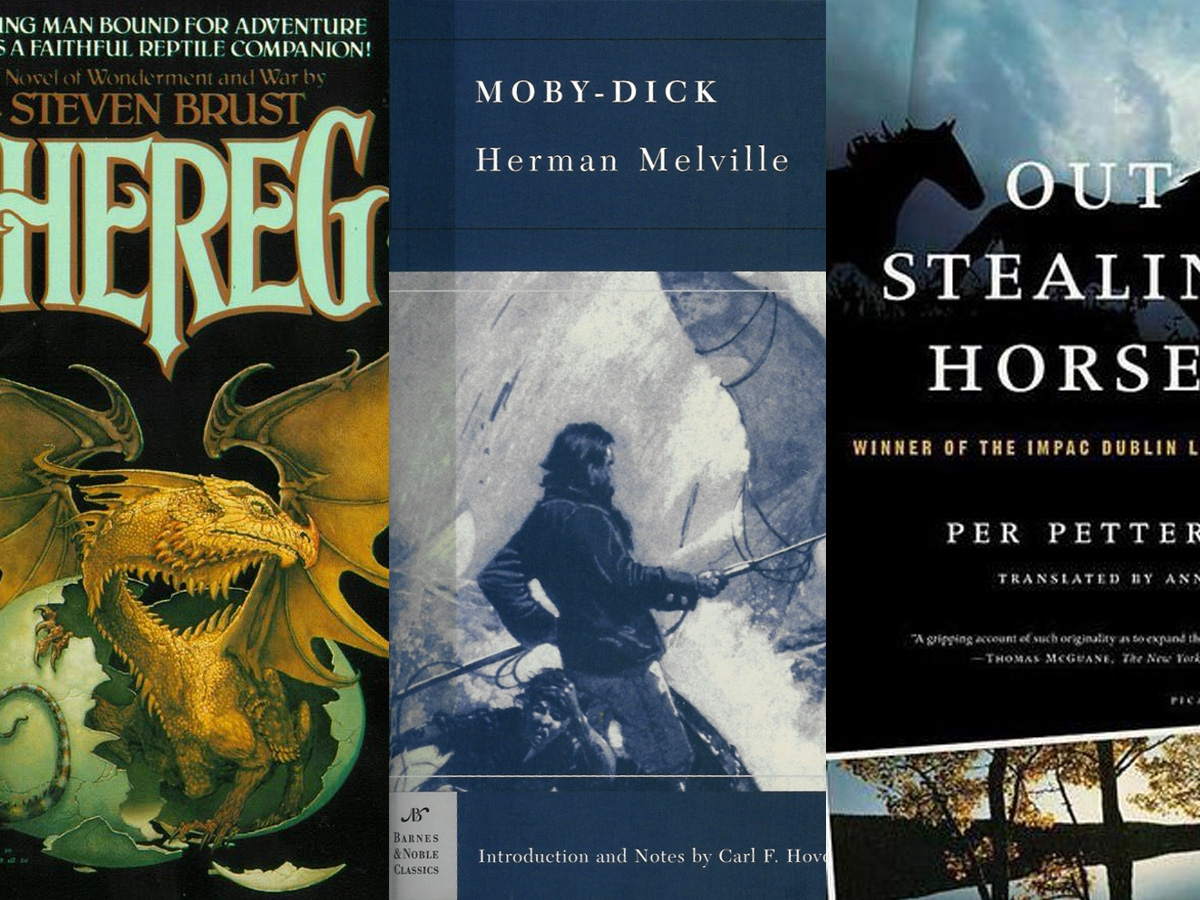 I fell out of love with reading a while ago because I felt like I didn’t have time to make it happen. I also live a very busy, extremely distracted life, and as a result I couldn’t find the peace to escape into a fictional world. Then podcasts started to become popular and I became a voracious listener. Audible, an audio-book service, advertised frequently on those shows: The usual hook was, if I was such a fan of podcasts, surely I could get into audiobooks.

In the few years since I’ve had a subscription, this has mostly been true. Listening to audiobooks is a different experience than listening to podcasts, though. Podcasts are more conversational, while audiobooks require more attention to the plot.

Between being too distracted and paying attention to the wrong recommendations, my first few books were at a loss. But after some amount of time I feel like I’ve figured out the right rhythm, because I’ve immensely enjoyed the following three books.

Out Stealing Horses by Per Pedersen

This is an understated, coming of age review as seen through the eyes of a Norwegian man in his mid-60s. The story jumps back and forth through time, with loosely related vignettes remembering seemingly mundane events that unfold with life changing implications. Death, puberty, family and politics all play their part as Trond Tobias Sander transitions from child to adult, and explores how those vibrations affect his life 52 years later.

The prose is as quiet, melancholic, meditative, but still powerful as you would expect from a strong, but lonely northern land worker.

This story runs in the same sort of strong male figure genre as Out Stealing Horses, but not as understated, not by a long shot. Moby-Dick follows Ishmael as he boards a whaling ship with the singularly obsessed Captain Ahab and a rag-tag band of boat workers who journey off in pursuit of the fabled white whale.

While this is the basic plot, the story is repeatedly paused while all sorts of whaling and shipping fascinations are interjected. This is probably among the chief reasons cited for this book being a boring read, but Melville dives with intense interest and flowery description into the beauty and horror of the duality of whiteness, critiques of old artistic representations of whales, and their scientific categorizations among many other diversions. Everything you ever wanted to know about whales in the mid 1800’s is all ascribed in this book, which reads as part novel, part lesson book.

Admittedly, the prose, while wonderfully executed, does often get in the way, and the overall movement of the plot can sometimes feel like you’re struggling to mount giant waves in order to race back down the other side to get the plot moving forward again. But provided you manage to keep your ship righted, the rewards of many juicy quotes are there for the taking.

The Vlad Taltos series is a much lighter affair, considering the first two recommendations. It’s a young adult series that follows the adventures and exploits of an assassin, his familiars, and his friends in a fantastical world. This particular world shares some common touch points with many stories in the fantasy genre, but it still plays by its own rules, mixing in elements from lesser-known cultures and adding in some noir-ish, murder mystery elements. The author is creating a unique world, not just leaning on the usual tropes.

Even though the series is now going on 30 years old, (and is still being written…only 14 of the 19 planned books have been released so far) the subject matter feels so much more relevant due to Taltos’ desire to do things purposefully and artistically, a sort of hipster anti-hero. It is well researched, but avoids the overly purple prose that we see stuffed into Moby-Dick. Sometimes Taltos will expound for a while on the best way to set a table, but it doesn’t take long for the story to progress soon thereafter. It also manages to touch on subjects like racism, class warfare, what we can do about it, and what we should do about it, and other modern concerns.

The whole series jumps around in the chronological lifespan of Taltos (with some stories even jumping between multiple books), but if you want to read in published order, start with Jhereg (pronounced Jur-egg) and follow the published list from Wikipedia.