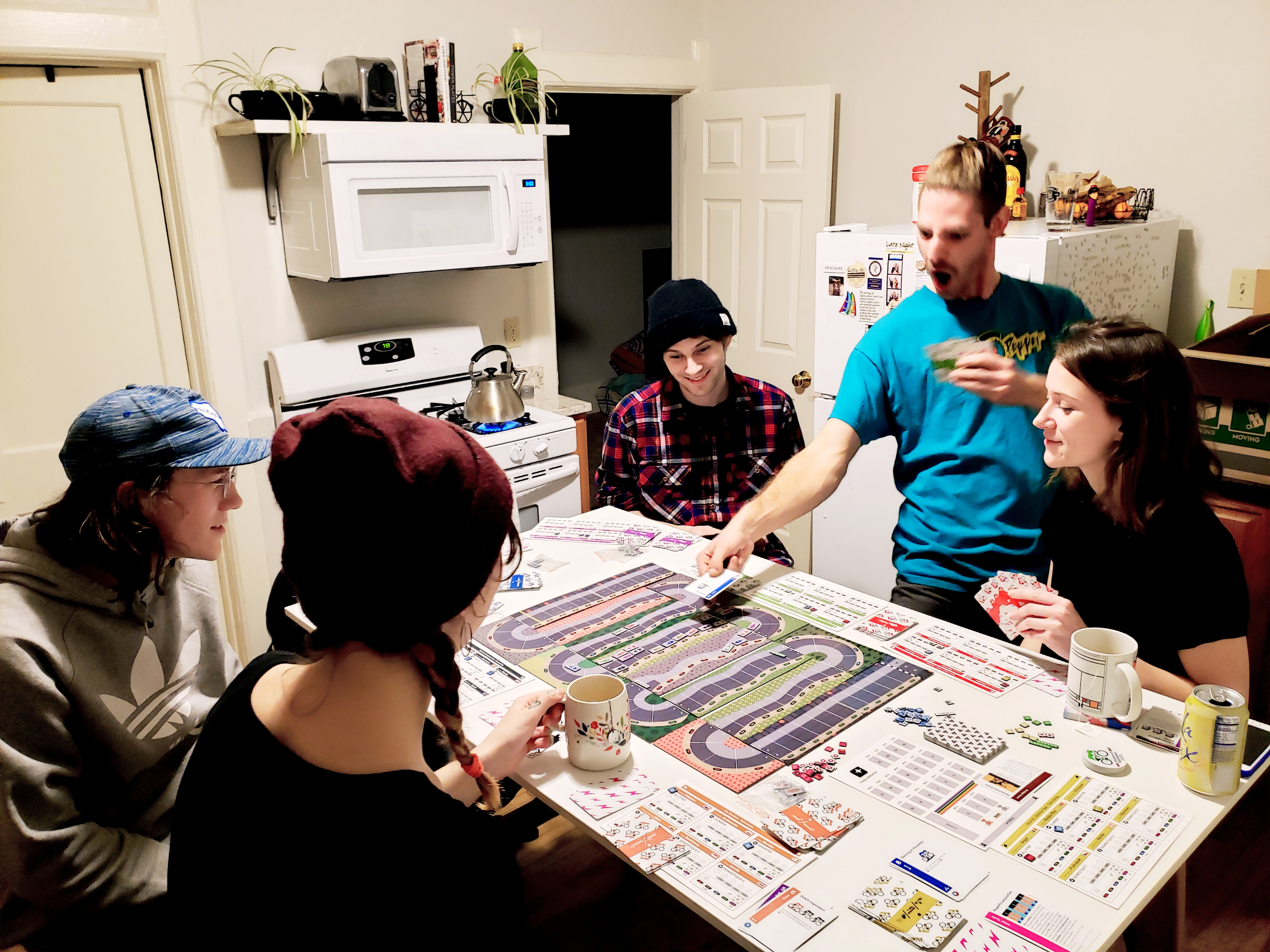 The short answer is that there are three things I’m passionate about: cycling, design, and getting together with friends for board gaming. Visions of Rainbows combines all three.

I really like playing board games because I’m on a computer through most of the day and playing games helps me reconnect with the real world and provides an excuse to get together with friends. All of these board games could easily be digitized and played over a network (and many of them are), but playing a physical game is like buying a vinyl record; there is a certain satisfaction you get when you pull a large box from your shelf, a lovely smell when you open the box, and a tactile warmth to pushing cardboard punch-outs across a board.

Thunder Alley was a notable game for a few reasons. First, it allowed between 3 and 7 players, which made it a highly flexible game. Second, it also had movement patterns I hadn’t seen before that were simple to understand, but not easy to master. And finally, it showed me that I might be missing some other great games based purely on rejecting the theme; I have little interest in car racing, but the game was well considered and subsequently very fun.

When it came to my game, it was important for the game to illuminate what makes the sport exciting. Cards aren’t simply called “Pedal” and “Pedal faster.” You can aero tuck on descents to give yourself a bonus, or butt heads to push opponents out of line, or even take advantage of the famous micro-cheat, a sticky bottle, to pull yourself forward to the next group. The intensity of the game builds as riders fatigue and their bikes take wear and tear until the final, frenzied, agonizing sprint to the finish line.

I wanted to build a game that was balanced for all players. The best strategy games make their players feel like they were responsible for the win, not just hoping for a lucky roll. This meant creating the right amount of flexibility when drawing action cards. Sometimes a player needs to make a big move to capture a bonus sprint, but other times it’s a matter of playing the long game and organizing your riders to benefit from another player’s moves.

Still, headline events, such as crashes, bad weather, or bonking have a chance to effect the game. These things happen in real life, and my goal was to make the event system as tasteful as possible so that the ultimate fate of the players shouldn’t be undermined by random acts. The same went for the tactics cards, which are the opposite of events, and can be played to your benefit.

It’s fun (and frustrating, yes) to watch people playtest your creation. Having to constantly remind players of the rules told me that there was a better way: rules could be simplified or removed altogether, card text could be refined or icons could be made clearer. But then one day you watch a game play out with your complete silence and that’s when you know that you’ve made something special that actually works.

You can support the Kickstarter campaign for Visions of Rainbows starting on January 11, 2020 and ending 30 days later on February 11.